What is the Franciscan Monastery of Kennebunk? 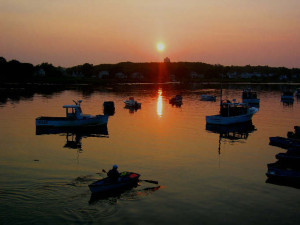 Kennebunkport’s changing tide and scenery on the river out to the Breakwater is fascinating, with perhaps the most serene and beautiful spots on the River – The Franciscan Monastery. On the western side of the Kennebunk River, you see acres of undeveloped, uninterrupted shore lands. Its extraordinarily natural given some of the larger hotels, like the Nonantum, Breakwater and Boathouse and Colony on the Kennebunkport side riverbanks. What’s particularly special about the 60+ acre parcel of Kennebunk land is that this is home to Franciscan monks, St Anthony’s Monastery, and these beautiful grounds and walking paths are open to the public, providing access to the riverfront in a truly 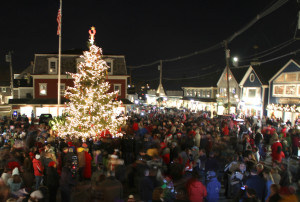 During Kennebunkport’s Christmas Prelude, the Lithuanian friars also open their grounds and their outdoor cathedral, Our Lady of Lourdes, for one of Prelude’s most unique events – Candlelight Caroling, a truly magical evening on the first Saturday of Prelude celebrating the holiness of Christmas.

A little history of the Monastery, it was first farmland in the 1700’s. In 1742 John Mitchell – a Christian Professor – bought the land, 200 acres, from Lieutenant Pepperrell, and built a modest farmhouses. Commemorating the previous Indian attacks here, there’s a 1744 statue of Saint Tekakwitha – the daughter of a Mohawk Indian chief who was stoned by her people for her devout catholic faith and sympathies for the colonists.

In 1906, the Mitchell family transferred the property to William Rogers, an iron magnate from Buffalo. Rogers acquired 155 acres for $50,000, and built the 6,000 square foot Tudor mansion he called Fairfields, the Rogers family summer retreat from New York. The extensive grounds were landscaped by Frederick Law Olmstead Brothers, designers of such landmarks as Boston Commons, Central Park, the gardens at the White House and Capitol Building in DC. At a cost of $150,000 at the time, Fairfields was considered a grand estate in Maine. 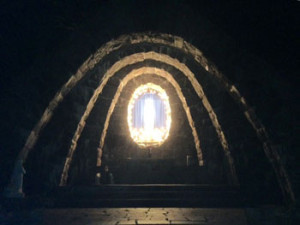 In 1936-37, the property was sold to the daughter of a Sanford textile mogul, Mildred V. Campbell, she then passed the property in 1947 to The Society of Franciscan Fathers of Greene, Maine, for $150,000, and Franciscan Father Justinas Vaskys from Lithuania came to Kennebunk and established his order and the monastery in the name of St Anthony, the Worker of Wonders. In 1953, the The Grotto of our Lady of Lourdes was constructed, St Anthony’s Chapel was built in 1956, and in 1959 the Chapel of Stations of the Cross was established in Lithuanian style, while the Monastery itself remains in Tudor style from the original home first built here over a century ago. The Roman Catholic Church under the direction of the Vatican, entrusts the guardianship of this and other shrines of the Christian religion to the Order of St. Francis. 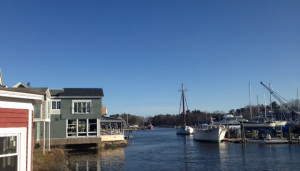 Saint Anthony’s Monastery offers visitors (of all denominations) 66-acres to explore of English gardens, walking paths to the river, statuaries and an outdoor grotto and shrine, plus the Chapel with stained glass from Lithuania, and a small gift shop by the chapel. Be sure to visit the Monastery, and be respectful of the Friars, and their peaceful, serene and spiritual refuge on this spectacular property on the Kennebunk River, not far from Kennebunk Beach.

Saint Anthony’s Franciscan Monastery is open to the public from sunrise to sunset, located off Beach Avenue near the White Barn Inn. Mass times with Friar John Bacevicius at the monastery are weekdays at 7:30am, Wednesday and Friday at 7:30pm, Saturday at 8am, and Sundays 8, 10 and 11:15am. You are welcome to explore the grounds, there is a “walking tour of the Shrines” map, and the gift shop is open during certain hours. 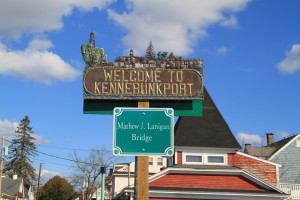 There is also lodging at the Monastery’s Franciscan Guest House, a non-profit hotel with modest rooms, at affordable rates in the Main Guest House, the Baltija, Palanga, Kretinga Tudor buildings and the White House cottage.  A breakfast buffet is available to guests, as is a buffet dinner in season, for a fee, there is an outdoor saltwater pool as an amenity in the summer months.

Read more about the history and happening in Kennebunk and Kennebunkport Maine.

4 Responses to “What is the Franciscan Monastery of Kennebunk?”