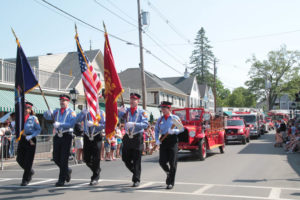 Here in Kennebunkport Maine, that’s how we like to roll, along with our lobster rolls.  Picture local school kids and US military marching through Dock Square, a memorial wreath is tossed off the bridge into the Kennebunk River, and we remember those who served our beautiful nation, from this beautiful seaside setting. Kennebunkport’s Memorial Day parade is back in 2022, Monday May 30 at 9:30 in Dock Square! 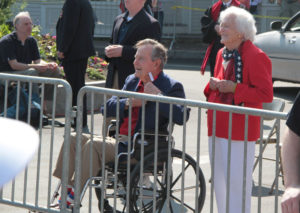 If you have never witnessed the Kennebunkport Memorial Day parade, it’s a must that you muster for this show of patriotism Monday morning of Memorial Weekend. Its a slice of American pie, a postcard for “the way life should be” and how our service men and women should be remembered and honored.

President George H W Bush (#41 as we call him here in Kport) and Barbara Bush were often in attendance for Kennebunkport’s parade, they both sadly passed in 2018, but they are remembered well throughout town at Walkers Point, White Columns First Family Museum, and Ganny’s Garden honors Barbara Bush.

The Kennebunkport Memorial Day parade takes place Monday Memorial Day, end of May at 9:30 a.m. in 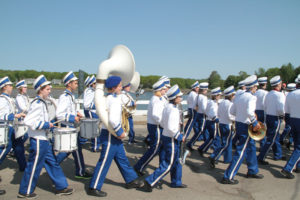 Dock Square. Folks start lining the streets by 9am from Kennebunk’s Lower Village by  the Clam Shack, across the Mat Lanigan Bridge to the center of Dock Square by the Monument where the official ceremonies are held.  Dock Square is packed with local people, folks from away, snow birds back for the summer, and dogs sporting flag bandanas. It’s a picture of patriotism.

The Memorial weekend festivities continue, with another parade down Main Street in Kennebunk at 2pm.  Much of the same bands, troops and twirlers are in this neighboring hometown parade… 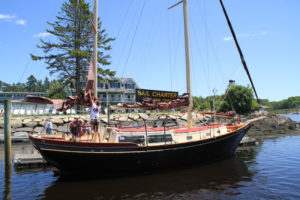 Memorial Day Monday afternoon, we recommend a reflective walk on Kennebunk Beach, a bbq or a live band – The Nonantum Resort features live bands, as does Old Vines Wine Bar.

Memorial Day Weekend is the unofficial kick off of summer in Maine on the seacoast. We can think of now better place to celebrate and commemorate than Kennebunkport Maine! Sea ya there! Se photos of Memorial Day Celebrations in Kennebunkport 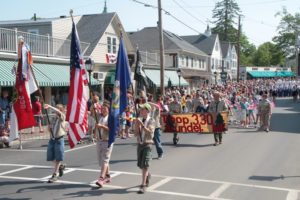 KENNEBUNKPORT: The Memorial Day parade kicks off at 9:30 a.m. Monday, from Temple Street and wind its way through Spring Street and down Western Avenue to Cooper’s Corner and back again. A 21-gun salute is held on the Mathew Lanigan Bridge.

CAPE PORPOISE: Half an hour after the ceremony in Dock Square on Monday, a smaller version of the Dock Square parade will move to Cape Porpoise. 11:30am

KENNEBUNK: The Memorial Day parade begins at 2 p.m. Monday in downtown Kennebunk. The route takes marchers along Main Street and features the Kennebunk High School band, among others.